Head Start for Young Woman is a Federation of Canadian Municipalities, that’s goal is to target young woman, between the ages of 16 to 24, and increase their involvement in politics. Head Start aims to help young woman take steps forward to achieve leadership roles in politics. A young organization, Head Start is focusing first to spread the word across London about their organization and goals. After this is achieved, groups will work towards possible solutions to increase more participation of woman on elected councils, hoping by 30%. Their end goal is to have more woman role models in committees, politics, as well as, student governments. Head Start began this campaign in London this year on October 18th, which an event at Kings University College.

Head Start is continuing their goals by hosting an event at Huron University College. On Friday December 6, 2013, an event held in the Great Hall will be hosted by both Head Start, as well as members of the history class 3801E at Huron. Four members of the class have teamed up with Voices of Change and will be presenting a short history of the political woman mentioned in the book, and will then facilitate a question period, where it will be discussed how we can make a change to woman rights and get woman equality in the political realm. Political guests have been invited, and in the attendance are former Mayor Anne Marie DeCicco-Best, City Councilor Matt Brown, Members of Ontario Provincial Parliament Peggy Sattler and Deb Matthews. The event aims to bring to light the issue of the barriers that women face when entering politics.

The event starts at 2:30 and is free to all. Please come out to support Head Start and Voices of Change, and be involved in a brilliant presentation and discussion of how to engage young women to be involved in politics and understand their potential to become part of their communities.

We hope to see you there. 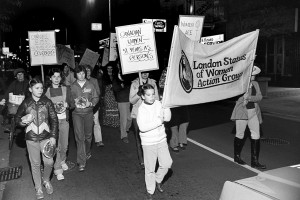 Take Back the Night March 1980. You can see the banner for LSWAG (The London Status of Women Action Group) this organization no longer exists. 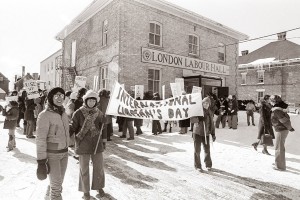 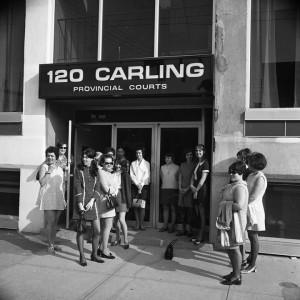 Protesting outside the provincial court building, 1970.

This blog is protected by Dave's Spam Karma 2: 10907 Spams eaten and counting...